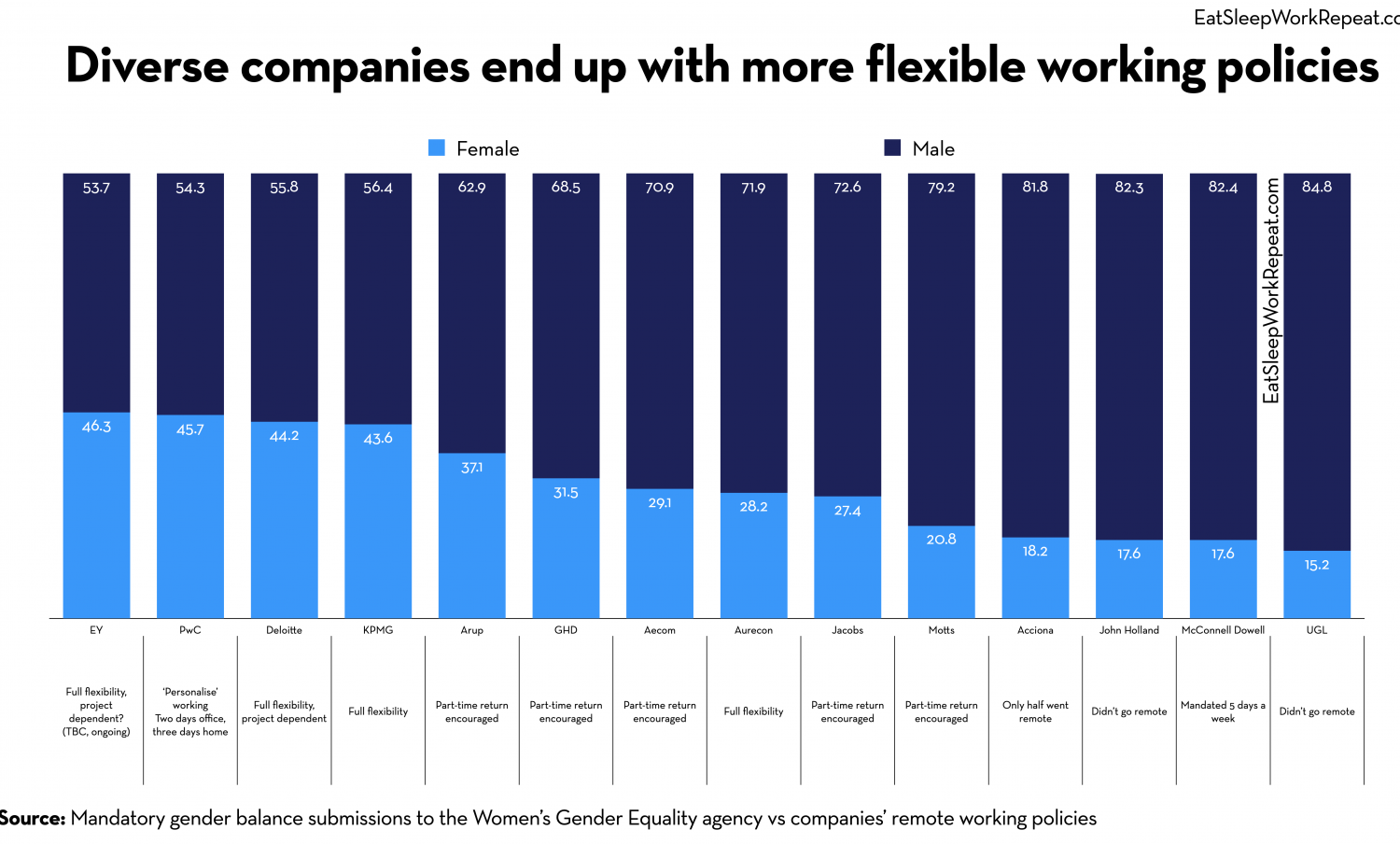 Proof that flexible working is a battle for equality

My mind has been blown this week with some analysis that someone sent to me. An anonymous female contributor, working in Melbourne, Australia, sent me a dataset that I spent some time analysing over the weekend.

As firms around the world are starting to plan their return to offices we’re seeing big differences in the approaches that organisations are taking. It seems that industries with a tradition of testosterone driven cultures are electing to go back to the office full-time. Could this be an example of where the lack of diversity in causing regressive decision making?

As Australia is ahead of most of the world in terms of returning to normality, it proved a productive place to examine this. Australian firms are largely out of their lockdowns and many have already implemented new flexible working policies.

Additionally, to allow us to measure different company profiles, firms there need to submit their gender balance to the Women’s Gender Equality Agency – we used six different measures and aggregated them into a composite gender score, then analysing this data to identify a trend.

This analysis takes two sectors (consulting & infrastructure/construction) and appraises the flexible working policies of firms versus the gender balance of the organisations: we found that male-dominated firms are more likely to insist on workers going back to their desks.

I’ll explain how we reached that conclusion. Firstly, we took a look at different firms gender split and then gathered their new flexible working policies. Click here to see in more detail.

Then we tried to create an index for what these policies looked like to help us explore a trend – this just allowed us to turn the company approach into something we could plot as a chart.

Once we had an index it allowed us to track the correlation:

True enough, firms with a smaller proportion of women working there were more likely to insist that their teams return to the office as soon as possible.

This is reminiscent of the discussion I published a few weeks ago where Rebecca Seal said: ‘The patriarchy wants us all back in the office – of course it does – because the old normal has served white middle class men with power very well for the last 200 years’. There seems to be clear early evidence that this is the case again, firms dominated by men seem to prefer to drag everyone to an office more frequently. (Which, whisper it, nicely helps perpetuate men being the people in charge).

It’s worth saying that there is one obvious outlier in the data. You’ll see it right in the top middle of the chart. This is Aurecon. Despite less than a third of Aurecon’s employees being women, their CEO in Australia and New Zealand is Louise Adams. Adams was awarded CEO of the year in 2020 and has made it clear that she believes industry needs to move on from the ways of the past.

This is why it’s so dangerous for newspapers like The Guardian to publish articles saying remote working is a failed experiment (see last week’s newsletter). For a lot of workers remote work finally allowed them to release the pressure of trying to manage a family while two partners were working. For the first time they can feel proud that they are getting their job done without having to sacrifice two hours a day to unproductive commute. They didn’t have to weather a soul destroying context of trying to prove that they ‘wanted it’ while trying to avoid causing lifelong damage to their kids by leaving them for countless hours in lonely childcare. The grim trade off is gone, they can just do their jobs.

There’s plenty of evidence that this moment of reflection has helped us to see that our old way of working was very strongly calibrated in favour of some groups over others. Here’s another take on the toxicity of The Guardian (and others) publishing articles saying that remote working has failed – this time from someone who works on disability rights for Scope.

Working from home is not a failed experiment and to assert such a thing is frankly ableist and discriminatory and plays into the hands of the commercial property owners and the push yourself until you break brigade.

This is a moment for us to revisit how we’re working. Anytime you’re told that they’ve decided that the evidence suggests that we need to go back to the way things were ask yourself ‘who did the old way of working unfairly disadvantage?’ and ‘who’s decided we’re going back to the past?’

Full data and breakdown for the charts is here (please credit usage).

And on that subject:

Of course, the big return to work question is ‘what does the boss want?’ https://t.co/QCj0AFCDdT pic.twitter.com/0wmMAOOpnp

Rutger Bregman’s Humankind was my favourite book of 2020 and it comes out in paperback next month. To mark that occasion, I spoke to him about universal basic income, the way that we’ve worked in lockdown, and why we turn our backs to lots of evidence that humans are innately kind, decent beings.

Rutger’s brilliant book Humankind is out in paperback in May 2021.

Listen back: If you’re wondering how to get your workplace culture popping when your team might not be together in the office all of the time then the series of podcasts I did about community managers was very popular last year. Jillian Richardson, the expert community organiser featured on the last episode tells me she regularly gets people approaching her to run remote workshops about connection.