I’ve been reading Gary Hamel‘s forthcoming new book, Humanocracy. He believes that the single most empowering (and profitable) thing that businesses can do is eliminate their creeping bureaucracy.

He talks about how increasingly organisations are paralysed with red tape and bureaucracy. The end result is that they can’t get anything done. There are some clear examples of this from the recent past. He characterises the Microsoft era under Bill Gates and Steve Ballmer as being one where opportunity after opportunity was passed because the organisation was so heavily bureaucratic. Satya Nadella has freed the organisation from a lot of this – with evident results.

Hamel proposes a series of questions that help you diagnose the extent of bureaucracy in your company.

Hamel conducted his own research into these questions for a piece in HBR. In it:

Hamel says that the bureaucratic class (this has the debatable definition of being managers/supervisors and admins) make up 18.4% of the US workforce and claim almost a third of the country’s wage bill.

He poses the question ‘how much bureaucracy could be eliminated without sacrificising organisational performance?’

“Most of today’s corporations were conceived as command-and-control organisations. The founders of integrated steel mills, for example, clearly assumed that the ‘genius’ of the organisation resided almost completely in management… In contrast, we built Nucor under the assumption that most of the ‘genius’ in our organisation would be found among the people doing the work. From the outset, we shaped our business to let employees show management the way to goals that once seemed unreachable”

Nucor plants make their own decisions on buying, products, staffing, sales and marketing. Each branch runs its own P&L with no corporate costs allocations. The mantra at Nucor is that decisions should be ‘pushed down to the lowest level’. Nucor’s admin costs (3%) are about half of those of the competition.

Teams base salary is lower but they have a massive opportunity to earn a collective bonus.

So what is Hamel’s solution. He says organisations should channel the power of start-ups. Teams are small, roles are loosely defined, there’s little pressure for conformance, risks are prized, formality is low. In surveys of the characteristics of work empowerment led to much greater engagement. He says that internal teams need to be exposed to more customers – or more competition. This was resonant of Satya Nadella’s idea that he wanted every single employee at Microsoft to meet customers. 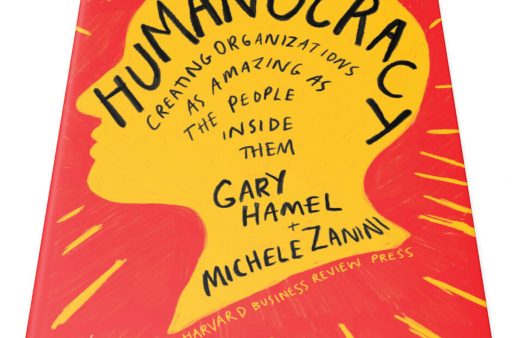 Gary Hamel: Battling bureaucracy – the big fix for broken work I was fortunate to speak to Gary Hamel about his forthcoming new book, Humanocracy. He believes that the single most empowering...